Listen to the string arrangement bars 1-8:

I doubled the bass notes one octave down in the basses (1-4), but left them out after that to keep the pianissimo phrase light (5-8). Where possible, I replaced repeated notes with longer notes to create a smoother movement, and although it would have been closer to the original piano version to leave the eight note rhythm in bar 1, personally I like it more as shown above.

I like where this is going, but maybe it’s all a little too heavy. Let’s try a higher key for example D major which is a major 3rd higher. Also the way this piece starts feels too fast for my taste, maybe a short 2 bar intro will lighten it up.

Listen to the string arrangement bars 1-10: 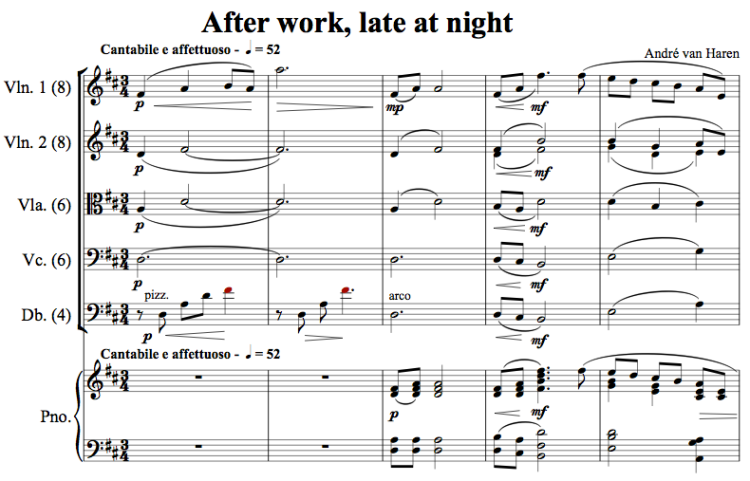 This sounds much better already. Now let’s question the string arrangement of the melody:

Contrast: is the melody set off clearly from its surrounding elements through contrast and playing in its best sounding range (tessitura)?

The melody is played in the top voice of the arrangement and will therefor be clearly heard. It sits in the medium to high register and mostly be performed on the violin’s d-string which in this 1 1/2 octave has a rich vibrant sound, and therefor suited for this kind of melody.

Repeated phrases: are there repeated motives that become more interesting when repeated in other tessituras?

The bar 5 phrase is repeated twice which covers the whole middle register, repeating it one octave higher will place it in the high to very high register creating a thinner sound which would rob this melody from the rich tone it needs. Placing it one octave lower would mean that it has to be played on the lowest g string for the first 5 notes after which it needs to be played one octave higher because that low g sharp note is as low as this string goes. Another problem is that breaking up this phrase this way would create a weird octave up break in the middle of a the melody which doesn’t sound natural in my ears. So we can conclude that the the repeated melodic phrases do not need to be repeated in other tessituras  for the sake of keeping it sound interesting.

André van Haren was born in 1963 in Holland. In 1990 he received a Bachelor Degree in Music in Classical Piano and Composition from the Conservatory in Utrecht, The Netherlands. His main instrument is the piano. He has written and arranging music for various ensembles including piano, choir, chamber ensembles and orchestra. View more posts